The Boston Celtics and New York Knicks have similar records at this point in the season. Why are their fans reacting differently? 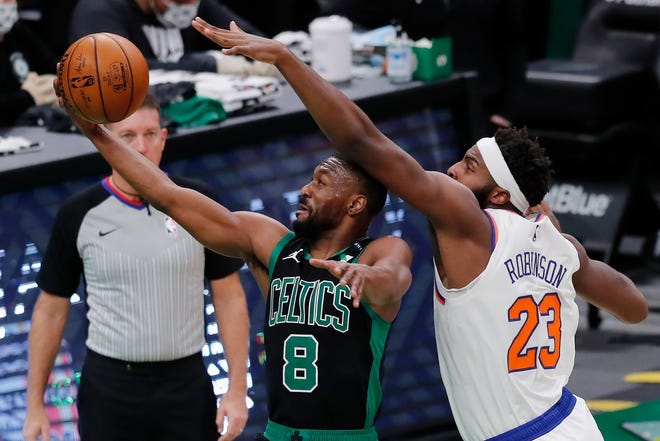 It’s officially the halfway point in the 2021 NBA season, so I thought it would be a great time to introduce a new series of pieces that I’ll be doing for FTS. This will pretty much be a multi-part, holistic view at the state of the NBA; looking at what we can learn from the recent past and what we can look forward to at any given time during the year, since the NBA is apparently a year-round thing now.

In the first of three parts to my Notebook, I’ll look at certain organizations that are currently moving up and down the NBA relevancy ladder. They could be trending upwards like the Knicks, or they could be looking at a desolate future like the Raptors.

If you have access to a TV, I strongly recommend watching these teams play.

New Orleans is starting to utilize Zion in the right way. This comes as good news to literally anyone who somewhat enjoys watching basketball, because watching Zion run point is like watching magic happen. It’s like watching a Rhinoceros move with the lateral dexterity of Christian McCaffery.

I’m not sure their roster makes complete sense, it’s still up in the air if Zion and Brandon Ingram are the right duo for their future. I’d like to see Zion with a stretch five that can defend- a Marc Gasol or Myles Turner type would be perfect. They’re rare, but it might be necessary for Zion to reach his full potential. They’ll probably miss the playoffs this year (which is fine), and hopefully they can move some pieces around in the offseason to fit Zion’s game a little better.

The Hornets are the most fun team in the league right now, and they have a legit shot at the playoffs. If you told me that would be their season four months ago I would’ve laughed in your face, then probably started crying.

I’ve lived in Charlotte for twenty years, and I haven’t seen anyone this excited for the Charlotte basketball team. Although it took him time to figure out the right lineups for this team James Borrego is a fantastic coach. I love the development of PJ Washington, Miles Bridges, and Malik Monk, who are all 23 or younger. Any of those guys could drop 30 on any given night. Lamelo Ball is a future All-NBA player, and we must do everything we can to keep him in Charlotte.

Are these officially the bright future Knicks? I’m rooting for them. And that’s the biggest thing. They have a team that people want to root for. That’s all they need in Madison Square Garden.

RJ Barrett has been solid this season, and now that the Knicks are winning, he can develop without the pressure of the city on his shoulders. Julius Randle has finally learned how to make a defensive impact thanks to Tom Thibodeaux, which has turned him into an All-NBA caliber player. Immanuel Quickley, also known as IQ, has emerged as one of the biggest steals from this season’s draft; the former 25th pick is challenging Tyrese Haliburton and Lamelo Ball in the race for Rookie of the Year. I love watching the Knicks, and I’m going to love it even more when they start allowing fans back into MSG.

To truly quantify the amount of panic I feel about these teams, I’ll leave an out-of-ten rating at the end of every breakdown.

Celtics fans are in shambles right now. I’d feel bad, but I’ve been around Hornets fans for pretty much my entire life. Bostonians are turning on former Franchise Savior Danny Ainge, and the future of the franchise is looking murky.

Jaylen Brown and Jayson Tatum will always provide a floor for Boston. However, they’ve lost so many assets for nothing (Rozier, Hayward, Horford). I’m not sure what they need to add in order to become a championship contender. They’re out of picks, they’re out of cap space, and they’re out of young, valuable trade assets. I’m not sure when we can expect to see a championship window open for Boston. Panic meters are relative, and this one is so severe because this is a franchise that expects to win championships. 9/10

Their panic button looked much different earlier in the season. Steph wasn’t exactly used to carrying a team, and it was a true hassle to accustom all of their new players to the Golden State system. Like him or not, Steph Curry is one of the most fun players to watch, there’s something about his presence on the court that makes him a must-watch at all times.

I’m still not sure what their plan is with James Wiseman. As expected, he’s a major work in progress, but his potential is apparent. I’m guessing that the Golden State front office is okay with being just a feisty playoff team this year, there’s no need to flip Wiseman for an impactful veteran. Along with every Golden State fan on earth, I’m hoping for a triumphant Klay comeback, and a sophomore jump for Wiseman that leads them to a top 3 seed in the West next season. 3/10

This season has sucked for Toronto, but they honestly have plenty of valid excuses. You can’t overstate how much of an effect their move to Tampa has had on the team. They made it late into the bubble last season, moved back to Toronto, then immediately moved back to Florida. That sucks. Pascal Siakam may have reached his ceiling, and I think they’re going to be moving in place for the next couple of years.

When I look at the immediate, 2-3 year future for the Mavericks, I don’t get too excited. This is a problem for a team that has a blossoming top-five guy in the league in Luka Doncic.

I’m not sure what their plan is with Kristaps Porzingis, who has become an extreme defensive liability and isn’t the same scorer he was a couple years ago. He’s getting to the line only 3 times a game as a seven-footer, and he’s shooting below 35% from 3.

If you can’t defend, you have to be an outstanding offensive threat. When you’re neither of those, I’m not sure you can be a top-2 player on a contending team, let alone a top-3 player. The Mavs need to take advantage of the window that they have during Luka’s rookie contract, and I think that starts with moving Porzingis. I’d love to see them package Porzingis, picks, and maybe an extra asset to move into the Top 3 of this year’s draft. I’d love to see Luka alongside a player like Jonathan Kuminga. 6.5/10

Heat fans have a right to be unhappy. It seems like they’re the team that changed the most in the bubble. Herro looked like a true blossoming star in the bubble, but he hasn’t shown much improvement this year. Nunn has also fallen in efficiency, but he’s getting back into rhythm. Adebayo and Robinson have been the only starters that have stayed healthy throughout the shortened season. So they’re still going to make the playoffs, and I’m guessing they’ll become more healthy as the season progresses.

My panic meter rating is about them missing on Harden and probably Beal. I’m not sure they have what it takes to make the finals again considering the wrecking crews known as the 76ers and Brooklyn. 7/10